Does anyone know any Japanese-speaking #COINseries enthusiasts who have access to Game Journal #61 and this "Destabilization in Kyoto at the End of the Edo Period" COIN? I'd be very interested to hear roughly how it works (a translation would ideal, but probably too much to ask!) pic.twitter.com/TnAAKvstJb 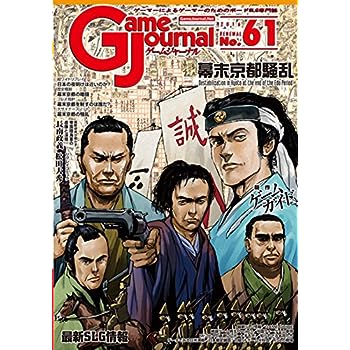 The arrival of the Black Ships in 1853, led by  Admiral Perry on the US Navy, split Japan's national opinion in two. Opening the country, or expeling the foreigners?  The thought to expell the foreigners is called "Joi"(攘夷).
In addition, it was common knowledge among Samurai class at that time that the emperor was above the shogun.  The thought of this is called "Sonno"(尊王).
The shogunate was ultimately prepared to open the country to the powers that be, but in kyoto, the emperor and aristocracies have a firm desire to expel the foreigners and are regaining political power after hundreds of years of losing against the backdrop of the explusion of the foreigners.

One of the lnfluent loads the shogunate, the feudal  load is Matudaira Katamori.
In 1853, Maturaida Katamori became to the Military Commissioner of Kyoto, so Aizu had both troops and a police force in Kyoto.

A special police force orgnized by the shogunate in 1853, Kyoto.
Many of them came from classes other than the Samurai class, but instead, the organization boasted of its strength based on a strong Bushido ideology.
Shinsengumi primarily carried out counterterrorist activity in Kyoto. They are also still a popular group in Japanese history, including their tragic end.

One of lords in Edo period. The Choshu clan promoted "Sonno joi" (the exclusion of the Emperor and the expulsion of the foreigners) and actively supported Ronin who were active in this movement. Some Ronin grew increasingly opposed to the shogunate's reluctance to expel foreigners. There were also a number of strong activists among the clansmen.
Choshu clan had the official residence in Kyoto. The clan's official residence was an extraterritorial jurisdiction, and the shogunate's personnel could not enter the residence.

Group of the Ronin who campaigned for the exclusion of the Emperor and the expulsion of the foreigners. The Ronin means a samurai without a lord or master. They have become the biggest activists, some carrying out radical activity like terrorism.

* Some units (member of Shinsengumi, Activists of Choshu clan and Sono joi) have real-life personal names, but they don't have any special ability in this game.

The city of Kyoto and the outoskirts of Kyoto are depicted.
So the map area is narrow comapred to other the Coin games, and it isn't geographical drawing, but a symbolic composition in the city of Kyoto.
Some areas are open to all forces (mainly urban areas), while others are open only to forces marked with a symbol.
One of the most distinctive areas is the "Kinri."(禁裏) The "Kinri" is the area where the emperor and aristocracies are located and is the target of political maneuvers. 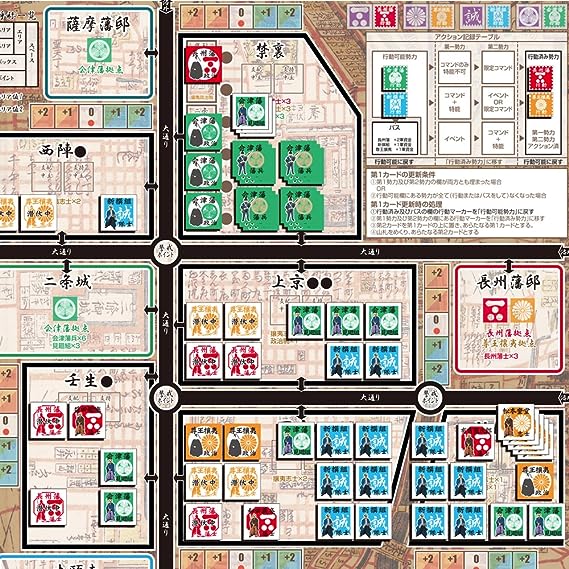 * number of action cards is fewer than regular Coin games, so play time is short.

In the case to drawn the end of term card

- do the seqeuce of the end of term

* In "mobilization", Aizu clan mobilize its troops and engage in diplomatic against other powerful clan (Satuma clan).

* In "Purge", Shinsengumi was run by a strong Bushido spirit, but the constant influx of outside personnel reflected the fact that there were often spies from outside forces in the mix, as well as frequent internal strife, including ideological turnover.

VP = Support level x Area point on the area that support their force.

VP = Support level x Area point on the area that support their force.

VP = number of their units